Frequent recurrence to fundamental principles: The Virginia Declaration of Rights 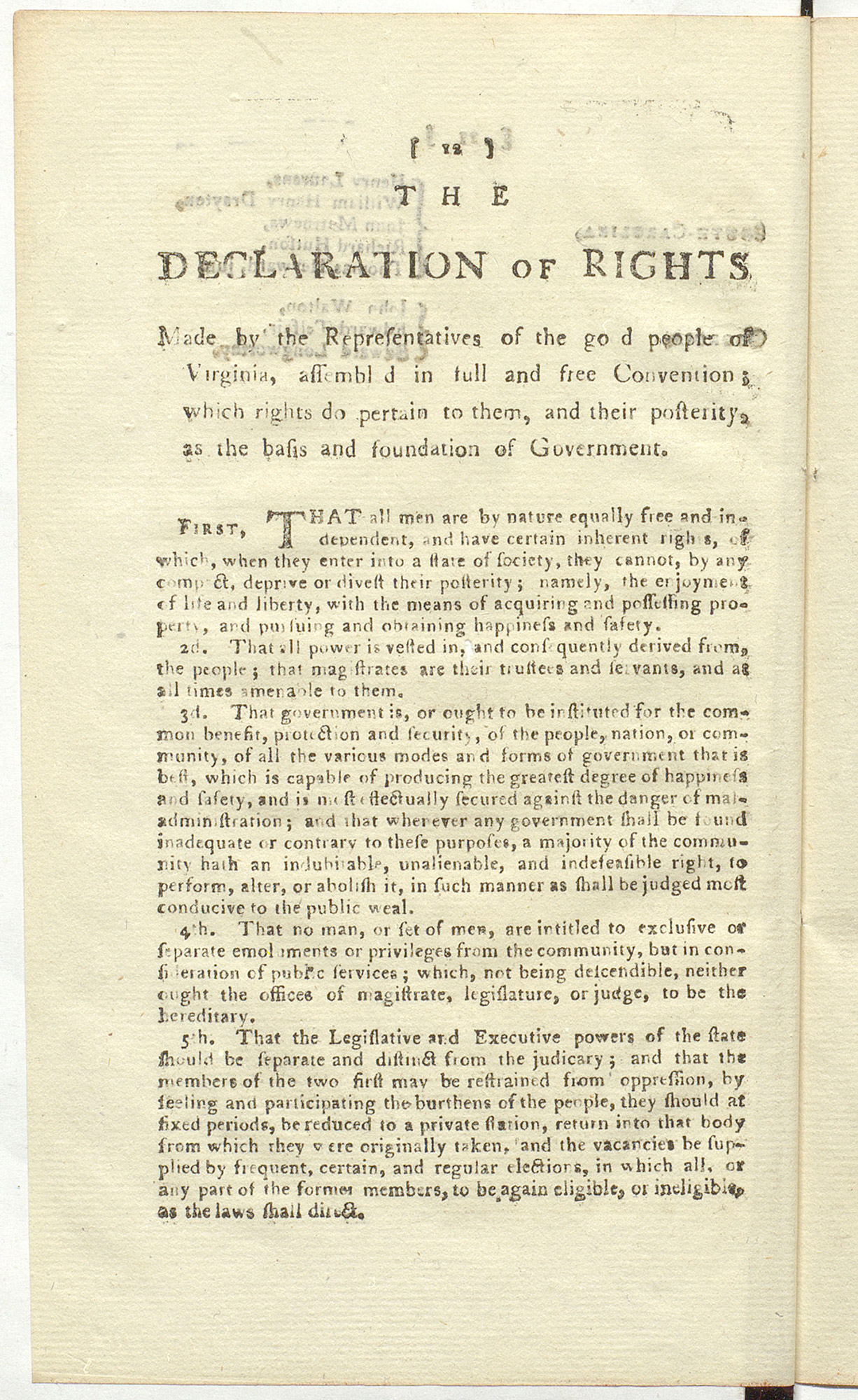 16 sections that changed the world

Published in weekly magazine Nedeljnik no. 453

The 1976 Virginia Declaration of Rights is the mother document of modern democracy.

It was written by George Mason, who was considered “one of the smartest people of his time”, in ten days in the solitude of a hotel room, and the first version had ten sections; then expanded to 16 sections, mostly at the suggestion of James Madison, fourth USA president, writer of The Federalist Papers. The Declaration of the Rights of the Virginia Colony was adopted at the Constituent Assembly of the State of Virginia on June 12, 1776, less than a month before the adoption of the Declaration of Independence – on which it had a decisive influence. The Virginia Declaration is still valid today because it represents the Charter of Rights (Article 1) of the Constitution of the American state of Virginia. The Virginia Declaration, with its depth and beauty of wording, has inspired a number of charters of rights of the constitutions of other states in the United States of America.

More than that – the Virginia Declaration of Rights inspired the most important legal documents of modern civilization. Thomas Jefferson was inspired by it when writing the most famous point of the Declaration of Independence, which was adopted after 22 days – on July 4, 1776: “We hold these truths to be self-evident, that all men are created equal, that they are endowed by their Creator with certain unalienable Rights, that among these are Life, Liberty and the pursuit of Happiness.–That to secure these rights, Governments are instituted among Men, deriving their just powers from the consent of the governed, –That whenever any Form of Government becomes destructive of these ends, it is the Right of the People to alter or to abolish it, and to institute new Government, laying its foundation on such principles and organizing its powers in such form, as to them shall seem most likely to effect their Safety and Happiness.”.

Thomas Jefferson assisted the Marquis of Lafayette in writing the French Declaration of the Rights of Man and of the Citizen in 1789: “Men are born and remain free and equal in rights. Social distinctions may be founded only upon the general good. The aim of all political association is the preservation of the natural and imprescriptible rights of man. These rights are liberty, property, security, and resistance to oppression.”.

When the Constitution of the United States of America was amended in 1791, with the Charter of Rights (the first ten Amendments) Jefferson again made significant use of the wording of the Virginia Declaration: e.g. “Eighth Amendment: Excessive bail shall not be required, nor excessive fines imposed, nor cruel and unusual punishments inflicted.“.

Finally, it is not difficult to notice that the United Nations Universal Declaration of Human Rights (1948) was inspired by ideas and formulations that originated in the Virginia Declaration: e.g. “Article 3. Everyone has the right to life, liberty and security of person.”

That is why I believe that the Virginia Declaration is the mother charter on the rights of citizens and the basic principles of the organization of free state power.

The USA Declaration of Independence, the USA Constitution, the French Declaration of the Rights of Man and of the Citizen and the European Convention on Human Rights (1953) omit the positive duties of living in virtue and helping others, without which – history has taught us – there is no successful human society. These documents impose only the obligation of tolerance, i.e. passive suffering of another. This is another reason why the Virginia Declaration should be studied in the context of grotesque modernity. Is it an obligation of tolerance, i.e. passive suffering of another person is a sufficient minimum for the success of human society, or should the standard be raised to live in virtue and help another person?

Despite all of the above, the Virginia Declaration of Rights is little known even to lawyers around the world. We live in a time that erodes people’s freedom. The greatest enemies of freedom are the despotic omnipotent state, populist policies, technologies that enable totalitarian control over people, and the people themselves who agree to exchange freedom for the comfort of a life without responsibility. Even the United States and the United Kingdom have fallen victim to the harsh electoral manipulations described in the shocking documentary „The Great Hack“ (2019). The democracies of France, Italy and Germany and other Western European countries are faced with great challenges. Not to mention many societies that do not even try to provide an environment of freedom to their citizens. Therefore, let all the citizens of the world “return to the fundamental principles” and think about them well – as required by the Virginia Declaration in Article 15. Below is my translation of the text of the Virginia Declaration.

A Declaration of Rightsis made by the representatives of the good people of Virginia, assembled in full and free convention which rights do pertain to them and their posterity, as the basis and foundation of government.